Is Kevin Costner Married in 2022? Who is His Wife? 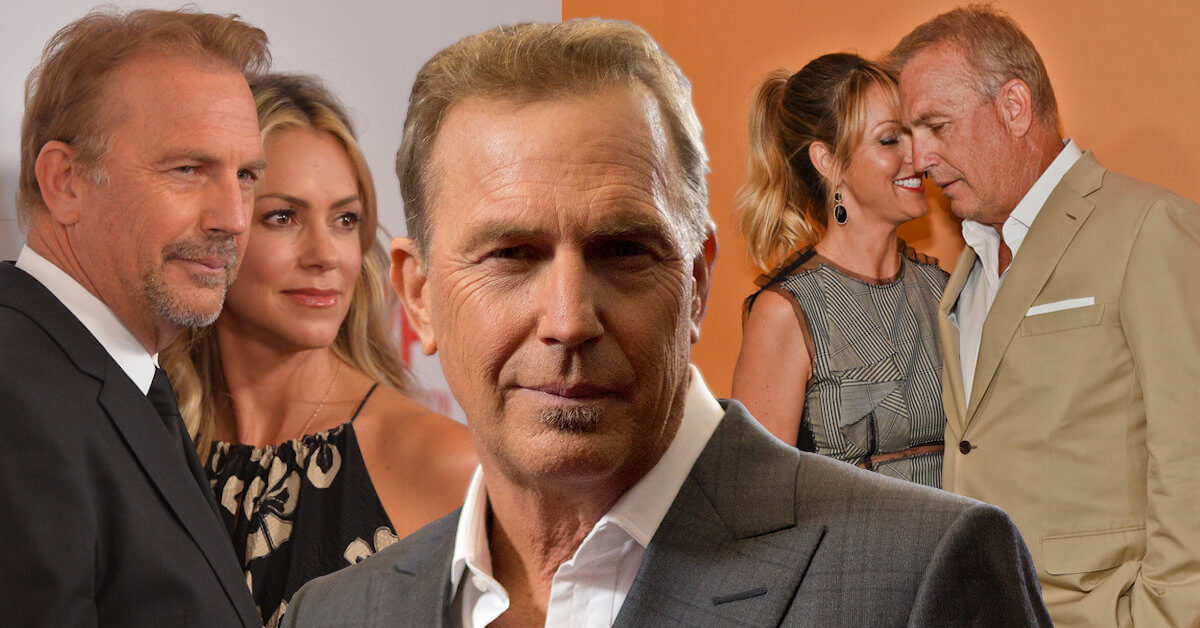 Kevin Costner is a famous musician, songwriter, actor, and filmmaker. Even though his career peaked a long time ago, his talent in some big movies definitely can’t be ignored.

He starred in several profound movies and series such as The Untouchables, Robin Hood: Princes of Thieves, and Yellowstone. Those are the movies in which he starred, but the list of films that he co-writes and co-directed are no less extraordinary.

Who is Kevin Costner’s Wife?

Want to know what’s more fantastic and dazzling about him? His list of ex-lovers. He is a ladies’ man, no doubt. Kevin is currently in a happy and long-lasting marriage with Christine Baumgartner. Still, knowing all the women he dated in the past wouldn’t hurt.

Inside Kevin and His Wife’s Long-lasting Marriage

Kevin’s longest and current relationship is with Christine Baumgartner, whom we might know from Primetime and Die Johannes B. Kerner Show. She’s also a well-known model and handbag designer. Even though she isn’t talked about as much as Kevin, she’s no less famous than her husband.

Christine and Kevin got married in 2004 and have already shared three children. But, Kevin himself is a father of seven because he had a lot of previous relationships and marriage before settling down with Christine.

Even though they’ve been together for nearly two decades, their relationship didn’t always go smooth and stable. They had been through on-and-off moments before being able to stick together until now.

In fact, Kevin was a completely different man before meeting Christine: he was unable to commit to one woman. He never liked to be in a serious relationship. Don’t worry. We’ll get to that exciting part pretty soon.

Kevin and Christine had their biggest obstacle before tying the knot in the early 2000s when Christine and Kevin had a significant disagreement about having kids. Kevin opened up in his interview with Parade, saying, “She said, ‘I’m going to wait for you, but not long. When you come to your senses, come back to me.”

“And I did. Maybe it’s the ability to say you’re sorry,” Kevin added.

After they became a husband and wife, they managed to overcome a lot of things together. They finally decided to have their first kid in 2007, four years after getting married. Even though there aren’t any vast arguments between Christine and Kevin, he still had another problem with sharing his love and care for all of his children and handling the “jealousy” between them.

“As my children interact together, there’s always this little bit of ‘Do you care for us now as much as you do them?’ That’s just a natural thing that happens, and you have to talk about how big love is,” he recalled in his interview with Mom.com.

Their firstborn child was named Cayden Costner. And a year later, they had Hayes Costner, followed by Grace Costner in June 2010. They have continued to live in a happy state since then.

Kevin’s Marriage with Cindy Silva that Was Full of Affair

Kevin Costner got married twice throughout his life, and he got divorced for the first time in 1994. His ex-wife was Cindy Silva, his college sweetheart, and now he has a stable married life with Christine.

However, since 1994, Kevin had A LOT of rumors and relationships – whether an on-and-off or a relatively long-term one. It makes him have a reputation as a “notorious playboy” and a “ladies’ man.” We will get into all of his relationships and entanglements pretty soon.

Prepare yourself to know Kevin’s VERY long list of rumors. Tawny Little, Cheryl Tiegs, Courteney Cox, Angie Everhart, Naomi Campbell, Mila Sorvino, Michelle Pfeiffer, Helle Berry, and Karin Reznick. Yes, I’m pretty sure you guys recognize some of the names because most of them were pretty famous in the late 90s.

It is also quite hard to keep track of the year and exact dates of his rumor and relationship, but it doesn’t mean impossible either.

Kevin and Cindy tied the knot in 1978 after they had been dating for a few years. After their first encounter in Dancing with Wolves, the couple stated that their chemistry and attraction towards each other just kicked in.

Their Marriage Seemed Perfect at First

Their married life went seemingly well in the first year. Kevin and Cindy even decided to own a racehorse that they named “Proudtobetogether.” Isn’t that sweet?!

The two shared three children: Annie, Lily, and Joe. However, it doesn’t matter how sweet their marriage seemed to be, and it ended pretty fast.

Kevin didn’t take a long time to enter the dating game again, though. He began his “hunting” journey right after he announced the divorce in 1994.

The divorce was actually not that shocking. Even when he was still committed to his wife, Kevin himself stated in his interview that he hated “living by somebody else’s rules.” Not only that, but he also spoke about the temptation to be with another woman (or many women, maybe?) was too strong.

“The temptations are pretty strong – and there’s a hungry world out there waiting for you to fall. So you can’t even dabble without paying a huge price. I try to conduct my life with a certain amount of dignity and discretion – but marriage is a hard, hard gig,” told the actor when he was asked about the divorce by the Daily News.

But that’s not what he said in his other interview. When he was starting his life with Cindy, he described her as “everything about women that I like.” I guess that didn’t stay for a long time, Kevin.

Not only people that gave him the reputation of being a playboy; even Kevin sees himself that way.

A lot of the media speculate that the marriage ended due to Kevin’s cheating habit (because there were too many rumors about him going out and about with other famous names during his marriage, but he never admitted it).

Kevin never addressed the news about the reason behind his divorce, but he just made sure to the media that he didn’t fight with his wife. Kevin and Cindy continued to co-parent their kids and maintain their relationships as friends.

Starting a New Relationship with Bridget Rooney Right after the Divorce

Now, let’s take a look at Kevin’s life when he was no longer “living by somebody else’s rules.” The first woman that Kevin was rumored with was Bridget Rooney.

They were reportedly dating for a year (not bad for a fling, right?) from 1995 to 1996. What’s more surprising is they shared a son, Liam Costner.

However, Kevin refused to recognize Liam as his son until Bridget forced him to take a paternity test, which confirmed that Kevin was indeed his father.

However, Bridget wasn’t the first woman that Kevin was linked with. Kevin might officially date her after the divorce. However, several affairs were brought about by the media when Kevin was still a married man.

He was rumored to cheat with Halle Berry in 1989 when his married life with Cindy was at the edge of the divorce, some reports said. At that time, Halle wasn’t even famous yet. Kevin had a good eye, though. Halle was starting her career with her character in Living Dolls.

Halle Berry and Kevin Costner remained low-key and never publicly said things about each other in their interviews.

Kevin Costner Fancied Michelle Pfeiffer a Little Bit Too Much

Kevin Costner was also reported to have a thing with the Batman Returns actress, Michelle Pfeiffer.

But, unlike with Halley, the rumor wasn’t about him having an affair with Michelle, but rather Kevin’s huge fascination with the actress to the point where he wanted to play Michelle’s love interest in the movie. But thankfully, that never happened.

Another tabloid headline that was worth mentioning is Kevin’s affair with Mira Sorvino. She was a goddess indeed. She played a carefree prostitute in Woody Allen’s Mighty Aphrodite, and her charm fascinates everybody.

Sadly, the rumor between her and Kevin came up in 1993. Yes, you guys read that right. It wasn’t even close to Kevin’s divorce because it was still two years prior to him splitting with his wife.

However, they also made sure to keep the affair under the wrap even though it was a total failure.

The Names Kept Adding Up: Still When Kevin Was Married and Had Three Kids

The name kept adding up. We also have Angie Everhart in 1995, Courteney Cox in 1995 too. Also, Cheryl Tiegs, still in the same year. Three supermodels and actresses in a year? Kevin’s charm and charisma were THAT good.

Kevin Thought about Entering Serious Relationship with Elle Macpherson, but It Was Ruined Once Again by His Affair

Alright, we’re finally done with Kevin’s rumor when he was STILL married to Cindy. Now it’s time to finally mention some of Kevin’s official relationships after the divorce. We had Bridget Rooney already, and of course, Kevin had more.

In 1996, Kevin Costner dated an Australian model, Elle Macpherson. The relationship got pretty serious (finally), but Kevin got involved again with another woman: this time, Carla Bruni was an A-lister Italian-French model.

His affair with Carla made him have to split with Elle, even though Kevin already said that he finally met his “equal partner with this beautiful, talented, funny and lovely person.” He was ready to move into a more serious phase with Elle actually before he met Carla.

There was a tricky situation between the time he broke up with Elle and meeting Christine Baumgartner. It seems like Christine was the one who can finally make Kevin interested in a committed relationship and having responsibilities with a family.

Well, even though he’s technically a father of seven, he discovered that he was finally ready to change when he got married to Christine (after being separated for a while previously).