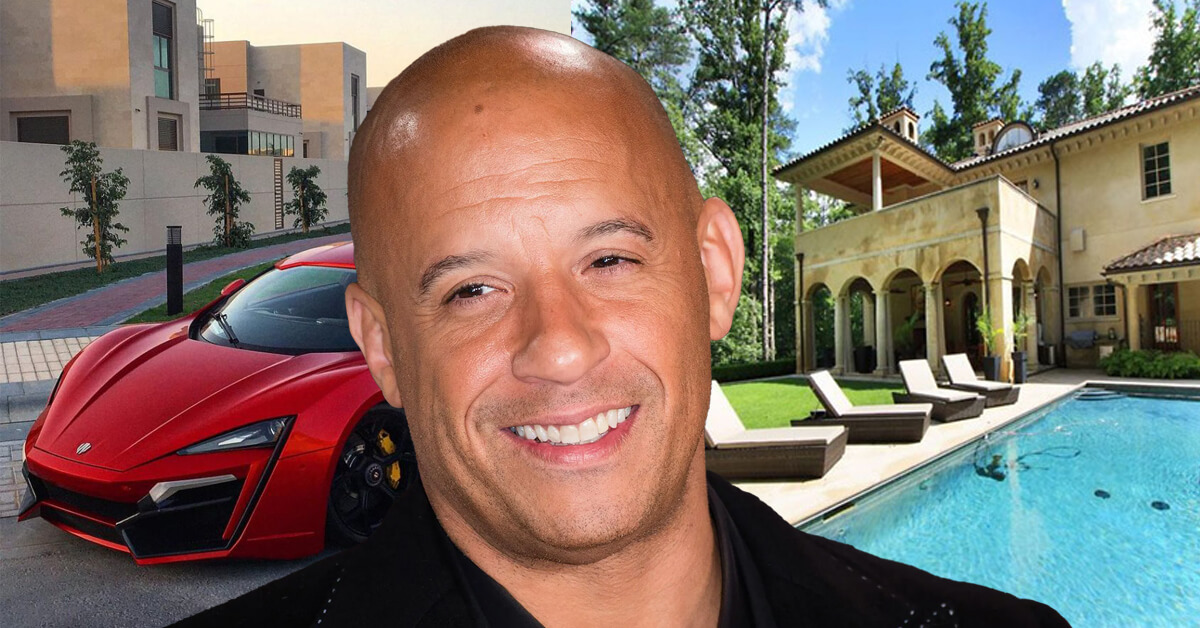 Vin has also established his singing and voice-acting careers. He released two singles in 2020 and voiced several video games.

Throughout his career, Vin Diesel has also been nominated for several awards, including the Teen Choice Award and People’s Choice Awards.

How Much is Vin Diesel’s Net Worth?

With a career that spans from actor, director, writer, producer, and even businessman, Vin Diesel has a stunning $225 million net worth!

It was mainly thanks to his role as Dominic Toretto in the Fast & Furious franchise. Vin also owns several companies, including a record label and a video game developer.

As of 2020, Vin Diesel earns $55 million for his various projects and endeavors.

The Ups and Downs of Vin Diesel’s Career

Vin Diesel made his first acting debut through an uncredited appearance in Awakenings in 1990.

He later produced his first full-length movie, Strays, in 1997. This movie received a deal from MTV to turn it into a series.

Vin Diesel proved himself to be one of the most desired actors by many movie franchises, as he lent his voice to Groot in Marvel’s Guardians of the Galaxy and signed a deal with Marvel for another franchise.

Vin is also staying booked and busy in 2020! He portrayed the leading role in the movie Bloodshot. He’s also set to appear in the long-awaited sequel of James Cameron’s Avatar 2.

Aside from acting, Vin shows off his multi-talent by releasing a song entitled Feel Like I Do.

“I am blessed that on a year that I would normally be on a movie set, I’ve had another creative outlet,” he said to The Kelly Clarkson Show. “Another way to show you, or share with you, my heart,” Vin added.

Vin Diesel also owns a house in Atlanta. The 11,900 square foot house is estimated to have a value of more or less $3.3 million.

Vin Diesel is known for his action-packed movies, so it’s no surprise that he would demand a high-quality trailer while on tour. His $1.1million worth custom-designed trailer is outfitted with all the amenities one could dream of. When it comes to traveling in style, Vin Diesel definitely knows how to do it right.

Vin and his family reside in his 5,521 square foot Beverly Hills home. Vin purchased the property for $5.2 million.

Vin is undoubtedly known as Dominic Toretto, a car-loving street hero from the Fast & Furious series. However, Vin himself is also fond of cars and has a fair share of his supercars collection!

Furthermore, Vin Diesel is now a family man and has three children, so it’s fair for him to purchase a van that can fit his family of five. Here comes the Rolls Royce Sprinter Van!

Like any other A-listers in Hollywood, a private jet is a must if you want to hide from the paparazzi’s prying eyes (or lenses.)

Since then, the company has worked with major production companies to produce and release Vin Diesel’s movies, including the Fast & Furious movies. It was reported in 2017 that the company had released films that grossed over $3 billion worldwide.

Furthermore, Vin committed to his love of singing by establishing a record label named Racetrack Records in 2017.

The Fast & Furious actor appeared in Dodge’s Brotherhood of Muscle campaign, a three-part ad series that aims to display the brand’s performance capabilities.

Who else is more suitable to embody the spirit of street racing than the one who portrays Dominic Toretto, right?

With the millions of dollars he earns every year, it’s unsurprising that Vin Diesel decided to spend it on luxurious houses and cars. However, he also frequently uses his money for good causes.

Vin Diesel’s teamwork with Paul Walker in the first installment of the Fast & Furious series instantly became the fan’s favorite, and the executives wanted an immediate sequel. They offered a $25 million deal to Vin Diesel to reprise his role, but the Guardians of the Galaxy actor refused.

“I had started to think of that first Fast and Furious as a classic,” he admitted. “If we ‘sequelised’ it the way studios were doing at the time, just slapping a story together, I’d ruin the chance of that first one becoming a classic,” Vin continued.

Vin Diesel’s movies have grossed more than $7 billion worldwide for his entire filmography. He made $47 million in 2015 with Furious 7, which made him the third highest-paid actor that year.