Nathan Fillion Partner: Who Is He Dating 2022? 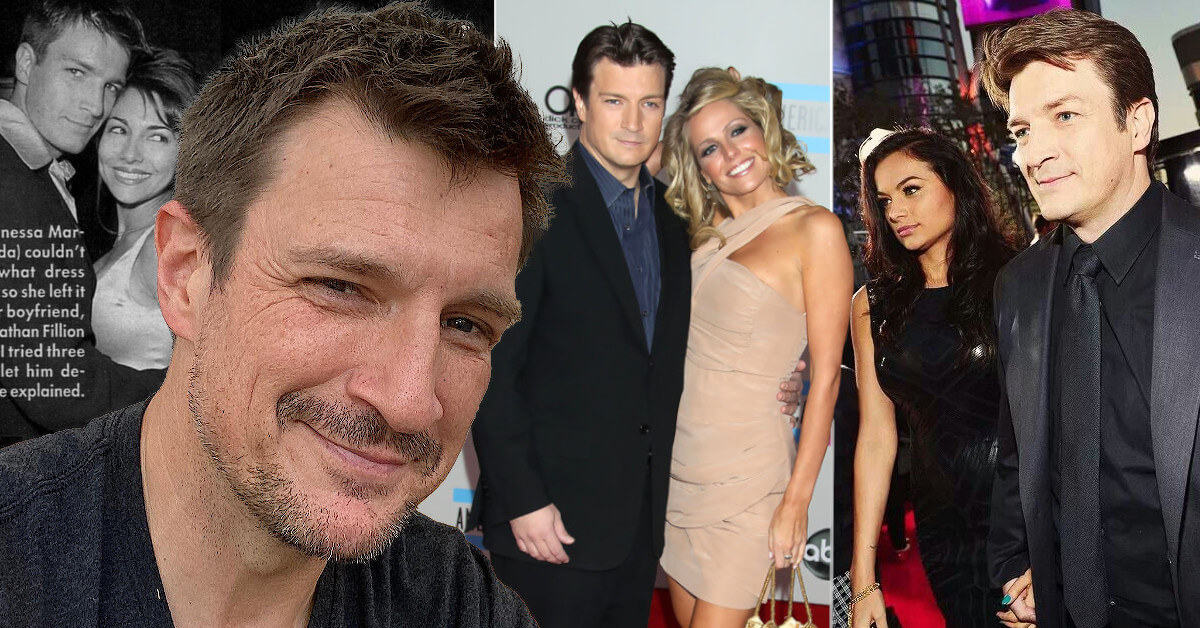 We can’t deny that many actors still have their charm in their fifties. Some people even believe that “men are like wine; the older, the better.” That term describes Nathan Fillion perfectly.

The Wonder Man in Marvel’s Guardian of the Galaxy Vol. 2 captivated more women as he grew older.

That’s why it’s not surprising if he’s been linked with many A-listers throughout his life. And we’ll know every detail about them in this article.

Nathan’s latest relationship news is with no ordinary woman. Her name must’ve been familiar to you guys because she’s not only appeared in many big-hit movies and TV shows, but she also used to date George Clooney. Yep, the lucky woman is Krista Allen.

Krista Allen and Nathan Fillion had a romantic relationship from 2015 to 2020. A five-year relationship is enough for a couple to strengthen their bonds and walk down the aisle together.

That wasn’t the case with Krista Allen and Nathan Fillion, though. As charming as he could be, Nathan has never been interested in marriage.

However, that didn’t mean their relationship wasn’t real. According to some reliable sources, Nathan got along pretty well with Krista’s son, and Krista was pretty happy with Nathan’s presence in her life.

Their seemingly perfect relationship had to end in late 2020 without the couple revealing anything about it.

Maybe the relationship ran its course, or it was because of Nathan’s reluctance to become a husband. Since then, neither Krista Allen nor Nathan Fillion has entered a new relationship.

We know that Nathan didn’t want to put a label on his relationship. Maybe because he still wants to focus on his career, or maybe marriage is something he can’t handle. However, he was okay with being engaged.

In 2013, Nathan was engaged with The Suicide Squad star Mikaela Hoover. According to Hello Magazine, Nathan proposed just months after he and Mikaela became an item. Of course, Mikaela said yes.

The pair started dating in April 2013 and got engaged two months later. Mikaela and Nathan even already planned a life and started a family together.

Sadly, the relationship ended too fast. It was Nathan who ended things first. In early 2014, they split less than a year after the pair were engaged. There was no further information about their decisions, but Mikaela was devastated.

Another Short Romance After Being Engaged with Christina Ochoa

Before Mikaela entered his life, Nathan Fillion had a relationship with the Modern Family actress Christina Ochoa.

Christina and Nathan ended up being engaged in 2012, but it seemed to be another short relationship in Nathan’s life.

Just like his romance with Mikaela Hoover, the engagement ring was too easy to break for Nathan Fillion. Although we’ve never known why Nathan’s relationships tend to fail, we still don’t give up on digging more about all of his romances.

The list of Nathan Fillion’s engagements hasn’t ended. From 2010 to 2011, Nathan was engaged (again) to another actress. This time, it was with the Shanghai Noon star, Kate Luyben.

Kate and Nathan kept their romance entirely under the rug, though. Besides some paparazzi that captured the pair walking down in fancy outfits, we only have details about their relationship.

The two were caught attending some red-carpet events together, one of them was when they attended the 2010 American Music Awards in Los Angeles and the Annual Monte Carlo TV & Film Festival in Monaco.

Kate and Nathan looked perfectly stunning while they walked side-by-side. Had their relationship lasted longer, the couple would easily be the most attractive Hollywood couple.

Nathan proposed after only two months of dating, resulting in their engagement ending in February 2011. Although Nathan didn’t seem to learn his lesson, this might be one of the reasons why he didn’t believe in marriage; most of his relationships failed in such a short period.

A Romance with Felicia Day: Rumor or Real Relationship?

Like many actors in showbiz, Nathan Fillion has experienced falling in love with his co-stars. This happened in 2009 when he and Felicia Day were co-stars in the mini-series Dr. Horrible’s Sing-Along Blog.

However, some media claimed this was a mere rumor since neither Felicia nor Nathan admitted publicly that the two were an item.

His fans became more convinced that Felicia and Nathan didn’t date in real life because the rumor fizzled out as soon as it started. So, it’s normal if people think they aren’t serious about their feelings for each other.

Five-Year Being Together with Parrey Reeves

We finally arrived at Nathan’s relationship, which lasted more than a year. In 2005, Nathan dated a renowned actress, Parrey Reeves, for four years!

Of course, we understand you expected a five-year relationship with many details to dig more about—especially a couple as famous as Parrey Reeves and Nathan Fillion.

Unfortunately, the two did an excellent job of keeping their romance to themselves. We had no idea why, but Nathan had a history of never revealing too much about his personal life, even though the identity of the girl he was dating had always been available on the internet.

Maybe that’s his way of keeping his peace of mind despite his responsibilities. But one thing we can know from Nathan and Parrey’s relationship was the two were also engaged.

Nathan needed to stop putting engagement as something that he didn’t take seriously.

We finally reached the end of Nathan’s list of ex-lovers. This one happened in May 1995 and ended one year after. Nathan’s relationship didn’t stay long, but it was his first romance with another famous person.

The woman in the relationship that we’re talking about is Vanessa Marcil. Vanessa kept quiet about his past romance with Nathan, and so did Nathan.

There was no further information about when and how the two collided in the first place, but some sources stated they met on the set.